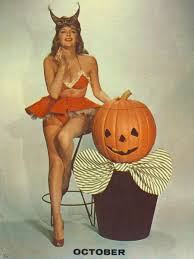 The final monthly instalment from Julie London's Calendar Girl album - or is it?


You may recall that this series started in November last year  given it was one of the September/October holiday purchases.
Given that we are currently on holiday again at the moment it seems appropriate for the series to conclude now.
Julie is wearing traditional Halloween attire I see. As an aside, Halloween appears to be much more of a thing with our American friends than on this side of the Pond. Here a few kids go out guising and that's about it. Annoyingly Trick or Treat now appears to have entered into the vernacular.

This October is a song written by her husband Bobby Troup and is according to the sleeve notes  a bouncy effort which would have made Larry Hart (who he? -Ed) proud

I hope that some of you have enjoyed this indulgence or maybe even parts of it. I suspect that only Alyson and perhaps Brian have made it to the bitter end.

Julie London - This October
Posted by Charity Chic at 08:00