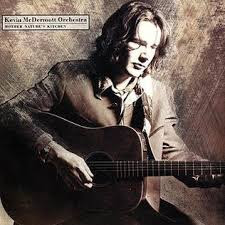 I knew that I didn't have Mother Nature's Kitchen the 1989 debut album by the Kevin McDermott Orchestra on the Festival Records label but I didn't know why I didn't have it .
To Scottish music lovers of a certain vintage it is pretty well known with the album cover being instantly recognisable.
I'm guessing that I've seen it countless times in charity shops but for some reason never pounced.
Betther late that never I  suppose.
It is fairly pleasant folk rock somewhat reminicent of Mike Scott, Justin Currie and Martin Stephenson (who I often confuse him with).
The S*n (don't buy it) listed it as number 37 in a list of the best Scottish albums ever. I'm not sure that I would go that far. It gets 4.6/5 from reviews on Amazon. I would give it a 3.5/5. Allmusic gave it 3/5.
It seems that he has released another 7 albums since  then none of which have ever crossed my radar.

Originally scheduled for Thursday before the spammers pounced.
Posted by Charity Chic at 08:00