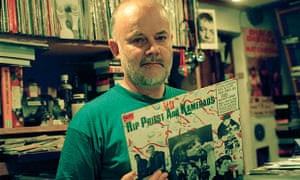 On Saturday I visited the new Missing Records shop in Glasgow's Oswald St (which has replaced the one under the Hielanman's Umbrella) where I picked up a good few CDs including some second hand Americana stuff that you rarely find in charity shops.
One such purchase was The Other Side - Music from East Nashville  a compilation from 2006 on Red Beet Records  which benefitted the Martha O'Bryan Center in East Nashville which offers employment and education to local residents.

I recognised about a quarter to a third of the 31 artists who appear and that was good enough for me.

I am familiar with the two below who both pay tribute to the late John Peel.A brief poem from Jon Langford followed by a song from Paul Burch which tells of a visit to Peel Acres.

Any of you who are fortunate enough to meet our dear friend Dirk will be blown away by his story of the time he visited Peel Acres.
It is the stuff of legend.