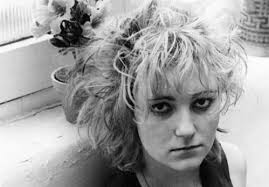 Back from two weeks far from the maddening crowd. Hopefully relaxed and ready to foist some more music on you poor souls.

My holiday reading during my first week was Clothes, Clothes, Clothes, Music, Music, Music, Boys, Boys, Boys the 2014 autobiography of Viv Albertine. And what a great read it is.
As you would expect her time as a member of Punk group The Slits features heavily as does her relationship with Mick Jones and her friendships with Sid Vicious and Johnny Thunders.
Equally interesting is her life after her time in the Slits came to an end when she was beset by health problems and an ultimately unhappy  marriage.
She is nothing if not a survivor and after years in the musical wilderness she commenced a solo career leading to the release of her debut solo album The Vermilion Border in 2012.
If you haven't already read her book I would urge you to track it down.

The Slits - I Heard it Through the Grapevine