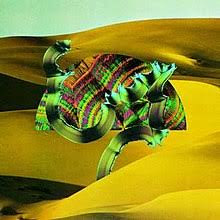 I picked up Django Django the 2012 debut album by the band of the same name in a St Andrews charity shot.
I had it in my head that they were from Edinburgh and that they played jingly jangly pop music.I got it about a third right.
They did indeed meet at Edinburgh College of Art but only formed the band after moving to that London.
I got the jingly jangly bit totally wrong.
Apparantly they are an Art rock band. No, me neither. I am told that Art rock is
is a sub genre of rock music that generally reflects a challenging or avant-garde approach to rock, or which makes use of modernist,experimental, or unconventional elements. Art rock aspires to elevate rock from entertainment to an artistic statement, opting for a more experimental and conceptual outlook on music. Influences may be drawn from genres such as experimental rock,avant-garde music, classical music and jazz

Avant-garde? Check  me!
Sounds more electronica to me with synths and drum machines to the fore.
Not normally the kind of stuff I go for and after a first listen I was ready to offload it. I've mellowed slightly after a second listen