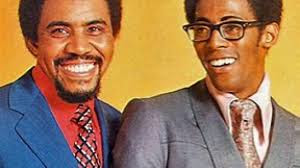 On my visit to St Andrews I picked up a Tamla Motown compilation Big Hits and Hard to Find Classics - 1 to join Volume 4 on the shelves.
The format of the first in the series is different from the latter as, as the title suggests, for most acts it features two songs,  one a big hit and the other less well known.
Not quite sure why Kim Weston and Bobby Taylor & the Vancouvers only feature once.

I'm following the track order for a little bit of Ruffin magic.
Tracks 4 and 5 feature older brother Jimmy. If you don't recognize the first song there is something far wrong. You may be less familiar with the second.
Tracks 6 and 7 are courtesy of younger brother David.The first of these two songs from 1975 is probably his best known solo number. The second from 1969 was his first solo single after leaving The Temptations.

I think there are only 4 volumes and  I've discivered that you can pick up Volumes 1-3 as a box set. Something to ponder.

Jimmy Ruffin - What Becomes of the Broken Hearted

David Ruffin - Walk Away From Love

David Ruffin - My Whole World Ended (The Moment You Left Me)