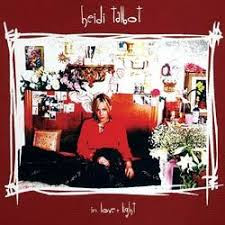 We've been fortunate enough to have seen Irish folk singer Heidi Talbot twice at Paisley Arts Centre and at Glasgow's Mitchell Theatre as part of Celtic Connections.
She is married to fiddle John McCusker and now resides in Scotland.

From 2008 In Love & Light is either her 2nd or 3rd solo album dependant on which source you read.
It is the only CD I picked up on the first week of our holidays in Fort William en route to Kinlochmoidart in the Ardamurchan peninsula. We were staying in a cottage in the grounds of Kinlochmoidart House with no phone signal or internet access. Bliss.
The only other place within miles where CDs were available was the Fisherman's Mission in Mallaig but none there took my fancy.

A combination of traditional folk songs plus some singer/songwriter tunes delivered in a Celtic stylee and all delivered wonderfully by Heidi and her stellar backing crew (Boo Hewerdine, McCusker,Eddi Reader, Kris Drever and many others).
Oh, and Heidi unleashes her inner Don Estelle with a version of Whispering Grass.Unbelievably the song by two characters from the racist and xenophobic alleged comedy TV show  It Ain't Half Hot Mum reached number 1 in the UK singles charts in 1975. Some of the stuff on TV in the 70's and which is portayed as comedy is quite toe curling.
Heidi does her best to repair the damage.

Heidi Talbot - If You Stay