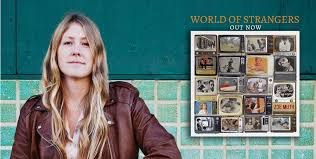 If Zoe Muth had done nothing more than written and sung  If I Can't Trust You With a Quarter (How Can I Trust You With My Heart?) her place on the shelves would  still be assured.
Happily she has come up with the goods again with Mama Needs a Margarita from her 2014 album on the Signature Sounds label World of Strangers.
This one appears to be attributed to her alone as opposed to with the Lost High Rollers who were namechecked on Starlight Motel  the 2011 album on which IICTYWAQ(HCITYWMH) appears.

The above two albums appear to constitute half of the Texan Americana singer's output, the others being the self titled Zoe Muth & the Lost High Rollers and Old Gold (a 6 track EP).
I can't see anything after 2014 so I'm not sure if she is still on the go. Let's hope so.