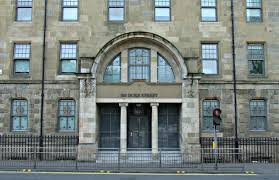 Glaswegians of a certain vintage will remember The Great Eastern a notorious common lodging house or hostel that used to stand at the High Street end of Duke Street. It has since been converted into flats.
Hopefully the  former residents have found more suitable accommodation.
The Great Eastern is also the third album by The Delgados from 2000 released on Chemikal Underground and until my recent trip tp Ballantrae was one of the two missing pieces of my Delgados jigsaw the other being Peloton.
I think that No Danger just might be my new favourite Delgados song.
Another great record from a consistently great and sadly missed band.

The Delgados - Accused of Stealing

The Delgados - No Danger
Posted by Charity Chic at 08:00