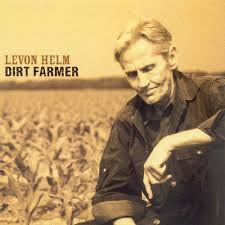 Yesterday's Band cover of Atlantic City saw me moving across to the Americana shelves to dust down Dirt Farmer the 2007 solo album by Levon Helm.
His first solo album since 1982 and one which saw him carving out a new niche and winning a Grammy  for Best Traditional Folk album.
We will stay on the covers theme for a little while longer with his version of Steve Earle's The Mountain the title track from Steve's bluegrass album with the Del McCoury Band. Good bu not as good as the original. Fact.
Backing vocals from Buddy and Julie Miller.
Levon's daughter Amy provides the backing vocals to a great version of Calvary a song written by Byron Issacs. Until now I was unaware that he was the only non- Canadian member of the Band..
Sadly Levon left us in 2012 at the age of 71.