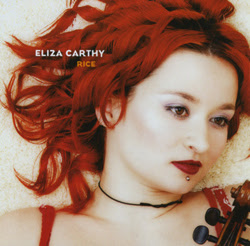 Rice by Eliza Carthy was the first album which jumped out at me in Fort William on the trip that saw me coming away with albums by Pat Buchanan and Pete Yorn and is the one which I am struggling with the most.
I knew it would be folk - after all she is the daughter of folk royalty namely Martin Carthy and Norma Waterston.
Now, I like folk as much as the next man, perhaps even more but I find this to be a bit too full on traditional for my tastes. I feel that I may be required to instal a maypole in the middle of the Muso room.
It seems that it was originally released as part of a double album Red Rice with Red also later being issued separately. Red I read contains more of her eclectic poppy folk I am more familiar with and enjoy and would perhaps have been a better option had it been available.
I'm still considering whether this one is a keeper.

Eliza Carthy - The Snow It Melts the Soonest