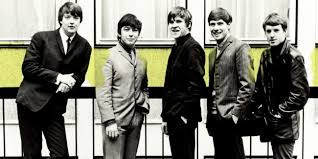 In this digital age my brother-in law and sister -in- law decided to disposed of their CDs.
I got first dibs.
There were about a hundred or so mostly mainstream and a fair number of best ofs. About three quarters have now been forwarded to the charity shop with a few keepers and a few we are still swithering about.
One that is a switherer (if there is such a word) is/are The Animals - it would be a keeper but for the dreaded this album contains tracks that are re-recorded. As Half Man Half Biscuit would have it - it's on the Hallmark label, that's sure to be good.
Featuring today not because of alphabetical reasons but because We Gotta Get Out of this Place recently featured on a retro TV cop drama and has ear wormed it's way into my head.


1.00 pm - Tracks have now been replaced with better versions

The Animals - Gotta Get out of This Place

The Animals - Don't Let Me Be Misunderstood