From Our Portugal Correspondent 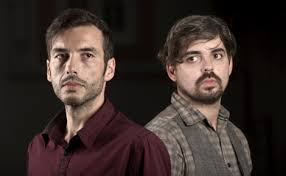 A (former) peanut farmer writes
At the end of last month I acquired a bit of money. I was also given a couple of packets of biscuits, some pretzels, a pair of gardening gloves and a man bag. This last item is the talk of the town. “Aqui está o homem ingles com a bolsa dele” they say as I walk into my local cafe for my abatanado. I never reply “Eu não nasci na Inglaterra”. I spent the money on some records downloads. Why the windfall? You might have thought that my friend of over three decades might have mentioned something in his blog, along with maybe a reference to the birthday of Johnny Cash, Fats Domino, Sandie Shaw, Michael Bolton. He didn’t......

There are now on the shelves in The Music Room, in the legal downloads section, two albums of what I can only describe as Portuguese Americana. There’s also an album by a Portuguese indie band. Back to the Americana, and today’s artists, who are called A Jigsaw. I’m not sure how the native population get on with pronouncing their name as the letter “w” does not exist in the Portuguese alphabet. They also cannot pronounce the “i” in jigsaw as it should be said, such a sound does not exist in Portuguese. Portuguese Americana, unpronounceable name, doesn’t that just endear you to this lot already? And you haven’t heard any music yet. On the strength of one YouTube video I bought their latest album, No True Magic, and after the first 4 or so tracks I was impressed, not hugely, but on the lines of “this is not bad at all”. The music is low key, and has been described as something like Calexico meets Tom Waits. A fair description (thanks CC), musically but not vocally. I also think there’s a bit of The Walkabouts in there too.  When track 6 came on it just blew me away. It’s bloody brilliant. So you’re not getting that one, you’ll have to buy the album (it’s on Bandcamp). This is the last track on No True Magic:


Buy the album. Then buy Like The Wolf, it’s even better. And then can someone please explain why I did not go and see the band when they played near-ish (40km) to our town last year? FFS it's not like I've got much else to do.


And finally. On this very day in 1950 Edward McKenna was born, usually called Ted. Brian Clough, though, would have called him Edward.  He is a drummer (Ted McKenna, not Brian Clough) and has played with Gillan, The Michael Schenker Group, and much more famously, The Sensational Alex Harvey Band. There’s not nearly enough prog-flavoured rock on these pages, so here’s a track from the album Framed, a song about an alleged witch:
There used to be a very fine, knowledgable, idiosyncratic music blog that featured birthdays every day. Whatever happened to it?