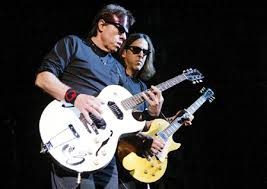 The other day I teased you somewhat by referring to but not featuring If You Don't Start Drinkin' (I'm Gonna Leave). Time to right that wrong
In addition to playing their own material George Thorogood and the Destroyers are not averse to putting their own particular spin on old Blues standards.
Here George gets his drinks in a slightly different order than the original by Amos Milburn. Hardly surprising perhaps given the circumstances.

George Thorogood & the Destroyers - One Bourbon, One Scotch, One Beer

Amos Milburn - One Scotch, One Bourbon, One Beer
Posted by Charity Chic at 08:00