Springsteen Covered - It's Hard Being a Saint in the City 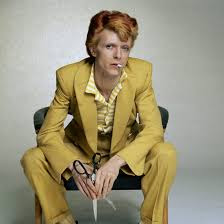 The Boss bounces back.After a 6-3 defeat in week 1 Bruce weighs in with a 6-3 victory over the Band with Atlantic City with JC somewhat cruelly offering a no score draw.
The scores are now even The Boss 1 The Rest 1
Fairly recently after reading his autobiography I posted a couple of songs from his 1973 debut album Greetings From Asbury Park N.J. Little did I realize that I would be visiting it again so soon.
However as fate would have it Wednesday's Burnt Offerings 10 threw up a fairly rare and fairly interesting cover - David Bowie's 1974 version of It's Hard Being a Saint in the City.
Pretty much the first thing that Springsteen ever recorded and it shows as it is pretty rough round the edges.
Probably not the best thing that The Thin White Duke has ever recorded  either but for me it is the stronger version by a distance.
As always, others may choose to disagree

Bruce Springsteen - It's Hard to be a Saint in the City

David Bowie - It's Hard to be a Saint in the City