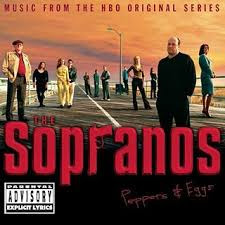 I wandered up to the till of the BRICC shop with 2 CDs to be informed that it was three CDs for a pound.
So it was back to what must be the most disorganised and thrown together CD section out there to quickly select a third.
I plumped for The Sopranos -Pepper & Eggs -music from the HBO Original Series.a double CD therefore giving 25 tracks for 33.33(recurring) pence.
A bit of a mixed bag to be honest as you can see from the tracklist
For my first pick I've gone for a song that I was sure that I'd featured before but apparently not Cake with Frank Sinatra. One which would have not been out of place in my name checked series and really only proper then that I next feature Ole Blue Eyes himself.
And finally some Italian rap courtesy of Lorenzo Jovanotti  the name on the CD although more commonly known as Jovanotti
The third Ballantrae offering will feature shortly