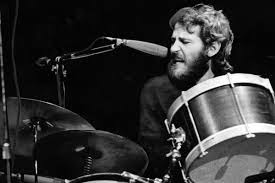 We are well and truly up and running now. It was a close run thing between Bruce and Everything But the Girl with Tougher Than The Rest  for a while before the Hull husband and wife duo pulled away and ended up winning by a convincing margin of 6 to 3.
So it is The Boss 0 The Rest 1
Will it be honours even or will Bruce like the Gambling Commission be hanging on by the skin of his teeth following the first, and certainly not the last visit, to the magnificence that is the Nebraska LP
Bruce's Atlantic City is up against another voice which divides opinion the late, great Levon Helm of The Band.
Their version is available on their 1993 album Jericho but I have taken it from Uncut's Born to Run 2003 which will probably provide a number of tracks for this series.
A tougher call for me this week. I quite like the Band's jingly jangly country/folk version  but it's the Boss for me this time round
Others, of course, may choose to disagree

The Band - Atlantic City
Posted by Charity Chic at 08:00