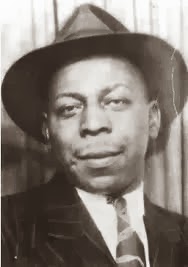 It's Big Mac time on The Blues Collection or rather Big Maceo time.
Born Major Merriweather in Atlanta,  Georgia in 1905 pianist  Big Maceo headed North like many of his contemporaries initially to Detroit and then on to Chicago.
There he hooked up with guitarist Tampa Red who joins him in the first track featured recorded in Chicago on 24th June 1941.
Sadly Big Maceo suffered a stroke in 1946 which resulted in paralysis to his right side.
Remarkably he continued to perform and record quality music as the second track recorded in Detroit in 1950 clearly demonstrates.
Big Maceo died from a heart attack in 1953

Big Maceo - Without You My life Don't Mean a Thing

PS - Germany have just recorded their 2000th page view and Italy their 1000th - so thanks to Dirk, Walter, Luca and all  their fellow countrymen and women!
Posted by Charity Chic at 08:00