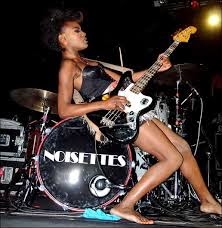 The Noisettes have been on my long list of acts to post for a wee while.
Drew's recent post of the fantastic Never Forget You caused them to be promoted fairly rapidly to the front of the queue.
The two tracks featured are from their 2007 debut album What's The Time Mr Wolf ? which can be purchased ridiculously cheaply.Slightly rawer but a bit rockier and less poppy than  the  follow up Wild Young Hearts
Tracks 2 and 3 were going to feature but after playing it the other night you are now getting tracks 1 and 4.
At the time they were a trio consisting of Dan Smith, Jamie Morrison and the talented and charismatic Shingai Shoniwa
Mr Morrison soon moved on leaving them performing as a duo.
I was sure that I had seen them back in the day and a rummage through my ticket tin confirms that this was indeed the case on Thursday 8th February 2007 in King Tuts before they  briefly took off
They are still on the go having released their 3rd album Contact in 2012.

Noisettes - Don't Give Up