More Myles on the Clock 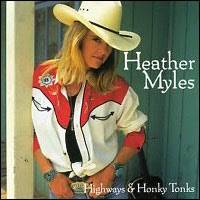 Just over a year ago I featured a post about a Heather Myles track from a Demon Records compilation.
At the time I confessed to knowing next to nothing about her. Ernie Goggins from 27 Leggies very kindly filled me in with some information about her and shared an mp3 of a duet she had performed with the mighty Merle Haggard.
Fast forward to last Thursday and I stumbled across a fantastic record shop Play it Again Records hidden up Ruthven Lane in Glasgow's West End which I had never visited before.
There for £2.50 I purchased a Kelly Willis album (more later) and two of the five studio albums Heather has released 1995's Untamed on Demon and 1998's Highways and Honky Tonks on Rounder  which is featured today.

A couple of quotes from the album cover:
"Tammy Wynette meets Buddy Holly in this by-God in-your-face, turbo charged country assault" Chet Flippo , Billboard
"With a twang reminiscent of Buck Owens and the punch of a Texas outlaw the production on this record will send you two-stepping truck stop to truck stop, head over heels"
It does pretty much what it says on the tin.
I will also take this opportunity to share the duet that Ernie first shared with me all those months ago.
Enjoy.

Heather Myles & Merle Haggard - No One is Gonna Love You Better