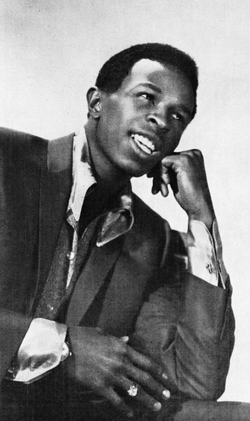 It is time to feature the second Arthur in this series in the shape of Mr Conley as opposed to Mr Alexander
Born in Mcintosh County, Georgia in 1946 Arthur Lee Conley died in Ruurlo in Holland in 2003 at the tender age of 57.
He is best known for his 1967 song Sweet Soul Music co-written with Otis Redding
An earlier song from 1965 I'm a Lonely Stranger also co-written with Otis features in Volume 4 of the magnificent Dave Godin's Deep Soul Treasures - Taken from the Vaults on the ever fabulous Kent label
Described as "melancholic, haunting and slightly unnerving -all that a Deep Soul record should be "
Sanctified Soul is another stonking compilation on the Kent label
Here Arthur's contribution You Don't Have to See Me   produced by Otis but written by Chris Harris and Roosevelt Grier is more of a soul ballad.

Arthur Comley -You Don't Have to See Me
Posted by Charity Chic at 08:00