Can You Dig It? 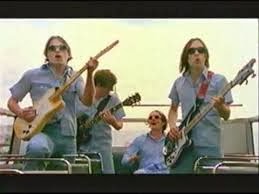 Another Scottish band today - this time power pop combo The Diggers
Alan Moffat and Chris Miezites, Kirkcaldy school chums, moved to Glasgow where they met up with John Eslick and Hank Ross and formed The Diggers
After seeing them play at T in the Park Alan McGhee signed them to his Creation record label where they released their one and only album Mount Everest in 1997.
The tracks featured here are taken from the 1996 single Nobody's Fool.
I think I probably saw them at King Tuts around that time, but I couldn't swear to it.
They are not, as people often assume, named after the Edinburgh pub The Athletic Arms known to one and all as The Diggers but rather from the tale of the Diggers from the World Turned Upside Down , the Leon Rosselson song featured on the majestic Between the Wars EP by Billy Bragg.

From a well known on - line dictionary

The Diggers were a group of Protestant English agrarian socialists, begun by Gerrard Winstanley as True Levellers in 1649, who became known as Diggers,because of their attempts to farm on common land.
Their original name came from their belief in economic equality based upon a specific passage in the Book of Acts The Diggers tried (by "leveling" real property) to reform the existing social order with an agrarian lifestyle based on their ideas for the creation of small egalitarian rural communities.

Every day's a school day (unless your name is George).