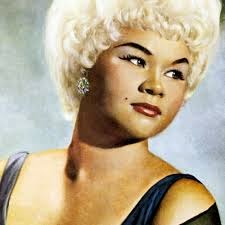 Was Jamesetta Hawkins (Etta James to you and me) Blues or Soul?
Was she Southern Soul, Northern Soul or just Soul?
Whatever.
She is featuring here today primarily in recognition of the recording of her 8th album Tell Mama (1968) at the FAME studios in Muscle Shoals produced by Rick Hall and on the Cadet label.
Whilst it contains such superb songs as the title track and I Would Rather Go Blind the stand out track for me is her version of Almost Persuaded
Almost Persuaded was written in 1966 by Glen Sutton and Billy Shirrell and has been recorded by a number of musical  legends including George Jones, Tammy Wynette, Charlie Rich, Lefty Frizzell, Bill Haley and Louis Armstrong.
It has also been covered by Beth Rowley and this version has previously featured on CMM.
However I would argue that Etta's is THE definitive version.
I had a Best of which did not include this and therefore acquired another one which did.
Who needs videos or You Tube - just shut your eyes and Etta will take you there
Also from 1968  recorded at FAME and again produced by Rick Hall is an interesting version of Sonny Bono's I Got You Babe