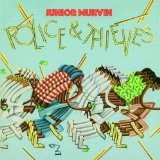 About a month ago I very nearly purchased Police and Thieves by Junior Murvin in Glasgow's Missing Records for 4 quid.
After a bit of swithering I decided against it which was somewhat fortuitous as I picked up a copy for a quid in a Paisley charity shop on Thursday.
I put it on in the car on the way home but had to take it off as Mrs CC, who was driving, felt that she was being hypnotised!
Must be the Lee Scratch Perry production.
Sadly Junior died at the beginning of December at the age of 67.(Seems funny calling someone aged 67 Junior!)
He was obviously best known for Police and Thieves which of course was subsequently covered by the Clash.
CCM has been up and running for about 16 months now and somewhat criminally The Clash have yet to feature.
Time to rectify that anomaly.

The Clash - Police and Thieves