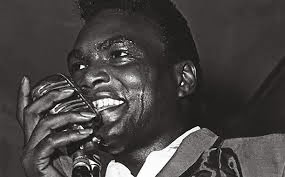 Welcome to CCM where last week's SSS post  featuring Denise LaSalle generated more hits and interest than a recent post on David Bowie!
Hopefully this week's post featuring the mighty Arthur Alexander will generate similar interest.
Born in Sheffield (in Alabama as opposed  to South Yorkshire) in 1940 Arthur sadly died from a heart attack in 1993 aged just 53.
You should all be familiar with his self penned 1961 smash You Better Move On the song that effectively launched the FAME studio in Muscle Shoals to international prominence.Subsequently covered by the Beatles, Rolling Stones and myriad others.
Indeed Arthur is allegedly the only artist to have been covered by the Beatles, Stones and Bob Dylan.(I'm sure that some of you will tell me different).
The first song featured here is also relatively well known - 1962's Go Home Girl subsequently covered by Ry Cooder on his Bop Til You Drop album
The second song is from 1968 and is another self penned number taken from the brilliant Trikont compilation Dirty Laundry - the Soul of Black Country.
Arthur was one of those artists who effortlessly straddled the artificial border between country and soul working and recording with the likes of Dan Penn,  Spooner Oldham and Donnie Fritts.
He fell out of favour, as many soul artists did, in the mid 70's and was working as a bus driver prior to a short lived comeback.