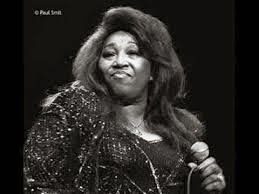 Somewhat sadly, Denise LaSalle is best known in the UK for My Toot Toot which reached no 6 in the charts in 1985.
She does however have a large following in the States as a blues and soul singer.
Born in 1939 in Humphreys County, Mississippi as Ora Denise Allen she is thankfully still very much with us and still going strong
She has recorded a shed load of records over the years signing for the great Malaco label in the early 80's where she recorded a number of critically acclaimed records
The first song, the somewhat raunchy A  Lady in the Street, comes from this period being a single from 1983
The second song is an earlier number from 1971 shortly after she returned South from a number of years in Chicago.On the Westbound label it is produced by Willie Mitchell and is an early example of the Hi/Royal studio sound.
If you are ever in Jackson, Tennessee feel free to pop in to the Blues Legend restaurant she runs with her husband and say hello

Denise LaSalle - A Lady in the Street