On the Eighth Day Machine Just Got Upset 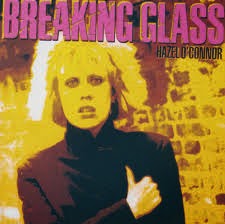 Breaking Glass was an album by Hazel O'Connor from 1980.
It was also a film starring Hazel and Phil Daniels.  It was apparently co-produced by Dodi Fayed who famously died in a car crash with Diana Spencer in 1997.
I don't recall having seen the film but by all accounts it was pretty dreadful.
The same, however, cannot be said for the album of the same name which is pretty good and which went platinum reaching number 5 in the UK charts and spawned these two top ten singles.
The famous sax solo on Will You? is by Wesley Magoogan who very sadly lost all the fingers on one of his hands a few years later in a woodwork accident.
Hazel O'Connor is from Coventry and is a vegetarian.