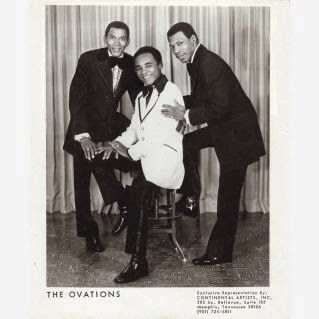 The response to last week's Arthur Alexander post was somewhat disappointing.
I can only assume that this was because you were all already aware as to his brilliance and therefore didn't need any further reminding.
A quick check of  the archives reveals that few if any groups have featured on Southern Soul Sunday so it is time to put that right.
The Ovations were a band who were signed to the previously featured Goldwax record label out of Memphis, Tennessee
These songs feature their original line up of Elvin Lee Jones, Nathaniel "Pedro" Lewis and the great Louis Williams on vocals.
Williams has a superb voice and is not dissimilar to the mighty Sam Cook. These early Goldwax recordings almost have a doo wop feel to them particularly on the first track from 1965 written by Dan Penn and Spooner Oldham.
The second track is self penned by the band and is again from 1965.
The line up changed over the years with only Louis Williams remaining at the end of the 9 singles recorded for Goldwax.
They reformed for MGM at the start of the 70's with a line up which included members of the Nightingales.
There were one off releases on XL and Chess prior to a final release for Dan Greer's Beale Street label in the 80s

The Ovations -It's Wonderful to be in Love
Posted by Charity Chic at 08:00