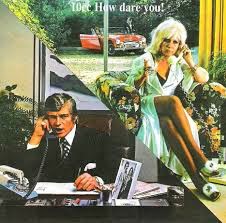 I saw 10cc at the Apollo in Glasgow in 1976. I went with two school chums and it was the second concert I'd ever been to. The internet advises that the support may have been Chas and Dave but if so I have managed to expunge them from my memory.
My first concert was Queen also at the Apollo supported by Mr Big who were therefore the first band I ever saw live!
I've no idea what my third concert was - it is a bit of a blank until I reached about 17 when you had a wider choice of licensed venues.
Anyway I digress
10cc where always a pretty arty band although some might describe them more as pretentious
They had a number of pretty good singles including the first track posted below and one truly awful one in I'm Not in Love.
In addition to the singles their albums also often contained some pretty strange stuff as the second track demonstrates
Both taken from the 1976 album How Dare You!