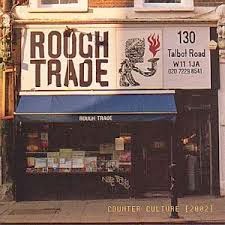 Rough Trade Counter Culture [2002] purchased in a Leith Charity Shop. 41 tracks for 50p which according to my maths  calculator equates to 1.22 pence per track.
Now there is some absolute rubbish on this compilation and frankly 1.22 pence is daylight robbery for some of the fare on display.
Some folk seem to be of the impression that sticking some random electronically generated bits of noise together with or without some utter gibberish constitutes music whereas it clearly does not.
However it is not all doom and gloom. There are probably just over a dozen reasonably good songs on here which still constitutes pretty good value.
If I can be bothered (and it is a big if) I'm contemplating something that I'm not sure I've ever done before namely recording the half decent stuff onto another CD and dispatching this one from whence it came. Not sure as to the legality of that but there you go.
Here are two of the better tracks.
First up is the magnificent Johnny Dowd with a typically intense song railing against the immorality of capital punishment.
I once saw Johnny play in the Barfly in Glasgow and he was so intense that my pal Big Pete had to retire upstairs to the bar (that's his excuse anyway).
Johnny is followed by Manda Rin and the boys with an excellent song recorded around the twilight of their career. Bis were Big in Japan and are quite possibly the best band ever to have come out of Thornliebank!