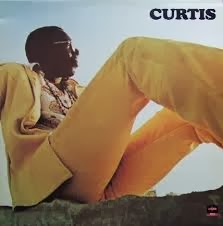 I stumbled upon these two tracks whilst cleaning out my Box folder.
I uploaded them ages ago but Curtis is a Northern Soul sort of a guy and therefore it didn't seem appropriate to feature him on the Sunday slot
Then I thought two lots of soul in the same week is  maybe too much for some . However, on reflection, it is Curtis and  is far too good not to share and even those not into soul will surely bow to his greatness.

Freddies Dead is from the  soundtrack to the 1972 blaxploitation film Superfly  written by  Curtis and was a million seller.
New World Order is from the 1997 album of the same name.This was his first album since being paralyzed from the waist down after some stage lighting fell on him in 1990.
It is incredibly moving in a similar way to Warren Zevon's The Wind but both would be great  great albums irrespective of the back stories.
Sadly his health continued to decline and he passed on in 1999 at the tender age of 57.