I Want to See The Bright Lights Tonight 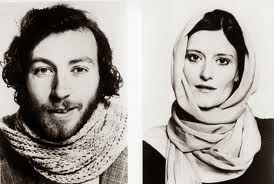 I feel a bit like 1001 Songs/40 Year Itch in that today's featured album  Richard and Linda Thompson's I Want to See The Bright Lights Tonight was released in 1974 some 40 years ago.
This was the first of three albums they issued as a couple the others being Hokey Pokey and Pour Down Like Silver both released in 1975 all on the Island label before Richard temporarily left the music business to concentrate on his Sufi religion.
They got back together in 1978 for First Light and then Sunnyvista culminating in 1982's album Shoot Out the Lights.
Their relationship was always somewhat stormy and at the end were only a couple professionally
According to Linda "even in the best days of our marriage Richard and I didn't communicate with each other tremendously well.I think that the reason that the music was good was that we tended to save it for work"
And here is the proof

CCM has just notched up it's 50,000th page view so a big thank you to all those who have stopped by
Posted by Charity Chic at 08:00