You Are Not Alone 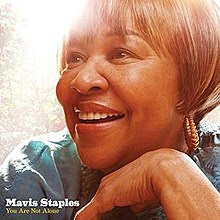 It's Celtic Connections time. Regular readers will know that Mrs CC and I normally attend 2 or 3 concerts annually in place of Christmas presents.

This year as with everything else it has fallen foul of Covid and is digital only. We've acquired a festival pass so we'll see how it goes. To mark the festival we have been working our way through the free CDs which used to come with the Sunday Herald. We have these from 2007 -2017. The most recently played was 2011 which has a song by Mavis Staples on it.

It is from her 2010 gospel album You Are Not Alone on the ANTI label and produced by Jeff Tweedy. An album which won a Grammy for Best Americana Album. It is also one I have a burn off so it has duly been looked out.

An album which would have normally been considered for the Sunday slot were that not currently Val's domain.

Mavis Staples - You Are Not Alone