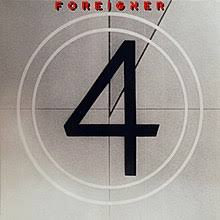 I think that we can all agree that Val is normally a lady with impeccable taste. So perhaps she can be forgiven for the occasional aberration.

Her foray into American soft rock was perhaps not her wisest move. The most positive thing you can say about 4, surprisingly, the 4th album by Foreigner from 1981 on the Atlantic label is that it does not feature I Want to Know What Love Is.

It does however feature their other big one Waiting For a Girl Like You which you will all be familiar with. Rather that subject myself to the rest of the album I limited myself to checking out the other two singles. I couldn't get to the end of Juke Box Hero so you are getting Urgent which by a slim margin is the lesser of two evils.

I'm not convinced that it will be a keeper.