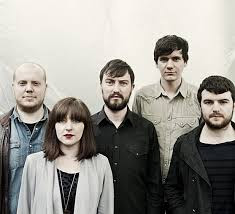 AsI've previously mentioned we've bought a digital Festival Pass for this year's Celtic Connections season in the absence of the real thing. Obviously it is not the same as seeing the acts live but it is better that nothing I suppose plus it puts some finance their way.

You can watch the concerts as they come out or for a week thereafter and I have been dipping in and out. I really enjoyed Come Away In  a song circle led by Karine Polwart and featuring Rab Noakes,Eddi Reader, Siobhan Miller and Findlay Napier  - all names that have featured here before.

Indie band Admiral Fallow were featured on Saturday Night.As this clashed with Spiral on the telly I caught up with it on Sunday afternoon. No Spiral spoilers please I've still to see the last ones

A band that have been on the go since 2007 but who have only released three albums during that period although lead singer Louis Abbot and multi- instrumentalist Sarah Hayes have both been involved in a number of other bands and projects.

It was good to see them in action and hopefully it will help to lead to another album soon.