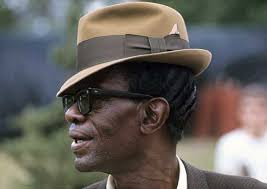 The word Lightnin' and Hopkins popped into my head the other day in rapid succession.
This of course can mean only one thing. That's right time to give the great Texan Bluesman at airing.
Sam "Lightnin" Hopkins recorded in the region of 1000 songs during his recording career from 1946 to his death in 1982 in Houston at the age of 1969.
He was a mentor to the likes of Steve Earle and Townes Van Zandt. I think that he first came to my attention via Andy Kershaw.
He has appeared here previously on a couple of occassions once as part of The Blues Collection.
I have three other albums by him and when thinking what to feature it seemed a good idea to feature the title track from each of them
So here is Jake Head Boogie (Ace 1998), Morning Blues (Charly Blues Masterworks Vol 8, 1992) and Coffee House Blues (Charly Blues Masterworks Vol 33,1993) all released around the time he was popping up on Kershaw's shows.
Lightnin' Hopkins - Jake Head Boogie
Lightnin' Hopkins - Morning Blues
Lightnin' Hopkins - Coffee House Blues
Posted by Charity Chic at 08:00