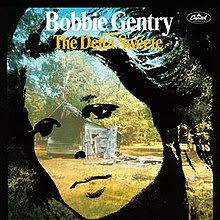 In one of my end of year round ups I mentioned that I was quite taken with Deluxe version of The Delta Sweete by Bobbie Gentry which has recently been released.

The Delta Sweete is a concept album based on modern life in the Deep South. Gentry wrote eight of the album's 12 tracks, which detail her Mississippi childhood and includes vignettes of home and church life as well as recollections of blues and country hits she heard as a youngster.The prevailing sound on the album was a swampy, folk-tinged combination of blues and country, with uptown touches like strings and horns seemingly added to reflect the then modern styles of soul music and the Nashville Sound (Wiki).That'll do for me.

I've just discovered that in 2019 Mercury Rev issued  an album Bobbie Gentry's The Delta Sweete Revisited with a lot of interesting collaborators. I'm off to track that down. You can't have too much of a good thing.