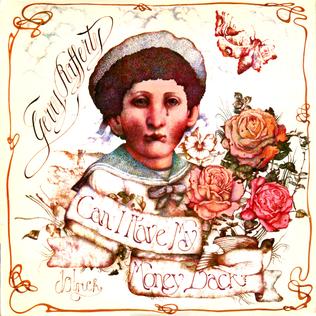 I'm still a bit devoid of ideas.So folowing on from yesterday's post here are a couple of songs that feature on the Sunday Herald Celtic Connections compilation for 2012.

You are getting one I featured  when I posted this last time round and one I didn't . I'm also limiting myself to songs and/or albums I already have  elsewhere.

The great Gerry Rafferty died on 4th January 2011 and there was a  concert in the 2012 programme to commemorate his music and his passing. The song the Sunday Herald chose to feature was Can I Have My Money Back ? the title track from his first solo album from as far back as 1971 and  one I have on an Antholgy of his work.

I'm pleased to say that King Creosote is very much still with us. I suspect that he and Jon Hopkins made an appearance to promote their 2011 album Diamond Mine. It was not one that I attended as I was just beginging to get into him at the time. Fortunately I've seen him a couple of times since.

Gerry Rafferty - Can I Have My Money Back?