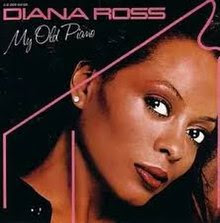 Val is back on safer ground this week with a 12 inch single from the Motown label.

From 1980 and written by Nile Rodgers and Bernard Edwards  My Old Piano  for her 11th studio album Diana the biggest selling album of her career. Probably the poorest of the three singles from that album given that the others are Upside Down and I'm Coming Out. Nevertheless it reached number 5 in the UK singles charts where it briefly hung around for 9 weeks and earned her a silver disc selling over 250,000 copies, one being Val's .

It should be pointed out that this is the Special Limited Edition Disco Mix in case you think it sounds slightly different from what you remember. On the subject of disco  I've added a song by Freddie Gwala following a hard drive search for the diva.

Diana Ross - Where Did We Go Wrong