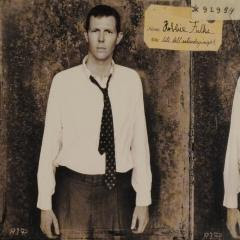 Not again - the fifth instalment of the accidental Saturday Night series. Is it ever going to end?

Of course it will but not just yet.Another four stonkers for you today.

Let's start with an artist I know nothing about Ella Mae Morse. Thanks to the internet I now know she is not the inventor of Morse code but that she was a singer of popular music in the 40s and 50s whose recordings mixing jazz, blues, and country styles influenced the development of rock'n'roll. Evey day's a school day, including Saturdays.

From the following era Ella Mae is joined by the mighty Dion Di Mucci. A Wanderer he may have been which may explain why he was continually Lookin' for the Heart of Saturday Night.

When he found it he may have been tempted to have a little boogie where he may well have been joined by Barry Ian Green better know as the legend that is Barry Blue.

TIme to finish by taking the enjoyment down a notch or two with a hero of mine Mr Robbie Fulks with the title track from his only mainstream album and the one which is probably his worst. Confirmation, as if it was needed, that some of the best artists are better placed out left field..

Dion - Lookin' For The Heart of Saturday Night

Four more for you next Satuday I'm afraid.