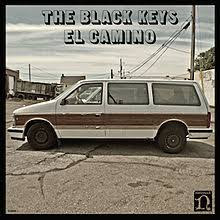 The third and final CD in my recent three for a pound selection at my local charity shop was El Camino by The Black Keys.
I was a bit unclear as to whether I had it or not.Turns out I didn't but nearly did at one stage. This post makes things clearer. Hence the Mark II in the title

Their seventh album from 2001  on the Nonesuch label it joins their second Thickfreakness on the shelves.It is much more polished and accessable than the scuzzy blues of their earlier offerings.It looks as though they had one eye on stadium tours and one foot in Kings of Leon territory.
The tunes have good riffs and are pretty catchy but to me they are all much of a muchness.
It's ok but it's no Kasabian!

The Black Keys - Gold on the Ceiling
Posted by Charity Chic at 08:00