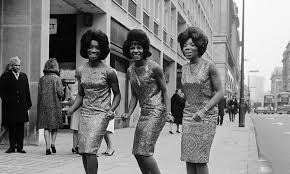 The 3rd disc but the 2nd instalment from He's a Rebel - The Girl Groups of the 60's (given that disc 1 is missing).

The most famous of the three acts featuring today is Martha Reeves and the Vandellas pictured above.
I'll Have to Let Him Go is probably not one of their most well known songs. There have been at least seven different line ups of the band over the years with Martha the only constant.
From 1962 the line up for this one is Martha with back up from Rosalind Ashford,Gloria Williams and Annette Beard.

Stranger in My Arms is from The Cookies who were active between 1954 and 1967 with some of the original members going on to become The Raelettes, the backing vocalists for Ray Charles.

A Little Tear (Was Falling From My Eyes) was a song by Linda Martell and the Anglos (and not the Angelos as Wiki would have you believe). In 1969 Linda was the first Afro-American woman to perform at the Grand Ole Opry.

Martha Reeves & the Vandellas -I'll Have to Let Him Go

Linda Martell & the Anglos - A Little Tear (Was Falling From My Eyes)
Posted by Charity Chic at 08:00