We're Doing Our Thing on the Friendship Train 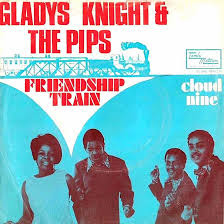 For the second Sunday in a row you are getting some Gladys Knight & the Pips. Don't say I'm not good to you.
I bought All the Greatest Hits in  my three for a pound deal along with Clem Snide and another which has still to feature.
I was aware that I had most of the tracks on The Motown Years but for that price I thought what the hell.
It turns out that there were only four that I didn't already have.
One of which was the wonderful Friendship Train which gives me an opportunity to feature this video which as the person with the naughty name who posted it states is performed for the whitest audience of all time.