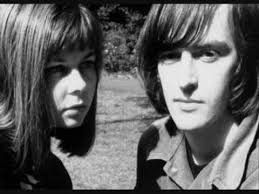 The final week and the final disc from this series on the Cherry Red Boxset Big Gold Dreams -A Story of Scottish Independent Music 1977-1989 which is probably just as well given the fact that the numbers and comments reduced week on week.
Most of you seem to prefer the music of the late 70s to that of the late 80's.
I must admit that I found the last few tracks on disc 5 very disappointing but still plenty to choose from..

I'm starting with the only selection who already have a presence on the shelves  namely Ken and David McCluskey who as well as being members of the Bluebells released three albums as the imaginatively titled The McCluskey Brothers. I have their album Wonderful Affair but She Said to the Driver appeared on an earlier EP on the Edinbugh label DDT

Teenage Superstars by The Vaselines is easily the pick of the bunch this week.Pictured above the Vaselines are primarily Frances McKee and Eugene Kelly.Kurt Cobain was a big fan with Nirvana recording two of their songs Jesus Doesn't Want Me For a Sunbeam and Molly's Lips

The Orchids are/were (not sure which) a band from Penilee in Glasgow who went onto record on Sarah Records. Therefore they have popped up on more than one occassion at Brian's place. Tiny Words comes from the Underneath the Window, Underneath the Sink EP.

As it is the last week you are getting  a bonus band. The Clouds were a Glasgow band not to be confused with the  60's prog band from Edinburgh or the Australian indie rock band of the same name.
Jenny Nowhere appeared on the Bring Back Throwaway Pop flexidisc along with the Birmingham band Mighty Mighty.

And that's your lot.

The McCluskey Brothers - She Said to the Driver