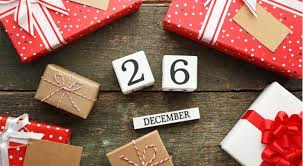 It's Boxing Day today and no we will not be braving the sales.

Rather we will be getting up late, having a champagne breakfast and generally relaxing as it is Mrs CC's birthday.
We plan to go out for a meal later in the week but today it is highly unlikely that we will  actually leave the house.
A few drinks, some telly and a listen to some music.
Given that the two artists below are among Mrs CC's favourites I would imagine that they will feature.
We saw Jessie Buckley earlier this year and are scheduled to see Ward Thonas in April.