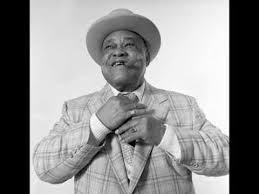 After a gap of nearly a year today sees a further instalment of the Blues Collection.
This is primarily because I picked up three from the series for a pound in Missing Records taking the total on the shelves to 53 out of 90. Getting there slowly.

Today's offering is "44" Blues by pianist Roosevelt Sykes who was also known as The Honeydripper.
Born in Arkansas in 1906 he was spotted by a talent scout and travelled to New York in 1929 to record for Okeh Records with 44 Blues being his first release .

Two more in the tank for you to look forward to.