Down Where The Spirit Meets The Bone 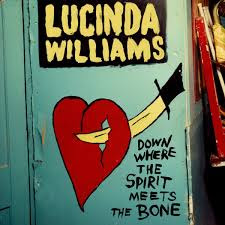 After all the vitriol in recent weeks here is a wee poem for you from Lucinda William's dad.

A poem which inspired Lucinda's 11th studio album from 2014 and one which I picked up recently and one which just about completes the set on the shelves.

It would have been useful to have had a copy of the second song for the Memphis v Nashville series.
Maybe next time around