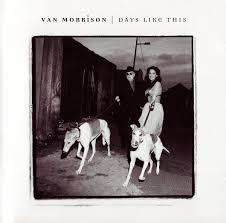 Mrs CC randomly selected Days Like This the 23rd studio album by Van Morrison from 1995 as one of the albums to accompany Sunday brunch and a read of the papers.

Given the weather, the time of the year, a cousin's bereavement and other well documented things which have been going on recently these two songs from the Grumpy Irishman seemed somewhat  appropriate: