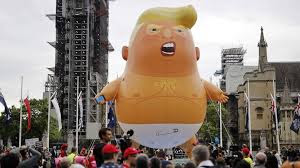 From one serial liar to another.
The Child -in - Chief of the USA is incapable of uttering a sentence or posting a tweet without lying through his teeth.

Having said that I am in two minds as to the current impeachment hearings.
On the one hand he is clearly as guilty as sin of bringing the Office of President into disrepute by abusing his power by pressuring Urkaine  to dig up damaging information on Joe Bidon by threatening to withdraw military aid.

On the other given the partisan nature of politics any vote by the Democrats in the  House of Representatives will be overruled by the Republican led Senate making impeachment highly unlikely.

Trump will then use this to galvinise his supporters and it could give him some much needed momentum in his bid to be elected for a second term.

Given that the world has gone mad I suspect that this is what probably is going to happen.