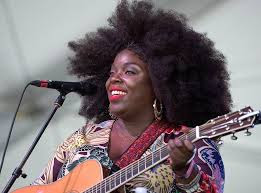 We went to see Yola in Glasgow's Oran Mor on Saturday night and she was fantastic.
I wasn't really that familiar with her music but was aware of the hype. She was put on by the Fallen Angels Club which is usually a good guarantee of quality.

With a personality the size of her fabulous hair she can effortlessly sing country, blues and soul and often all within the same song
She has received four Grammy nominations for Best New Artist, Best American Roots performance with Faraway Look, Best American Roots song (Faraway Look as well ) and Best Americana Album with her 2019 debut Walk Through Fire co-written with and produced by Dan Auerbach on his Easy Eye Sound label. That's Dan's second appearance in a row here.

She seems to be taking America by storm forging links with Sheryl Crowe, Brandi Carlisle and the Highwomen. Not bad for a girl from Bristol.

When she is playing the O2 and the Hydro I'll be able to look back and say I was there when she played in front of a couple of hundred folk in Oran Mor.

Support was from Winnipeg based William Prince who quickly won over the crowd with songs from his debut album Earthly Days.

William Prince - All I Know

Yola - Walk Through Fire
Posted by Charity Chic at 08:00